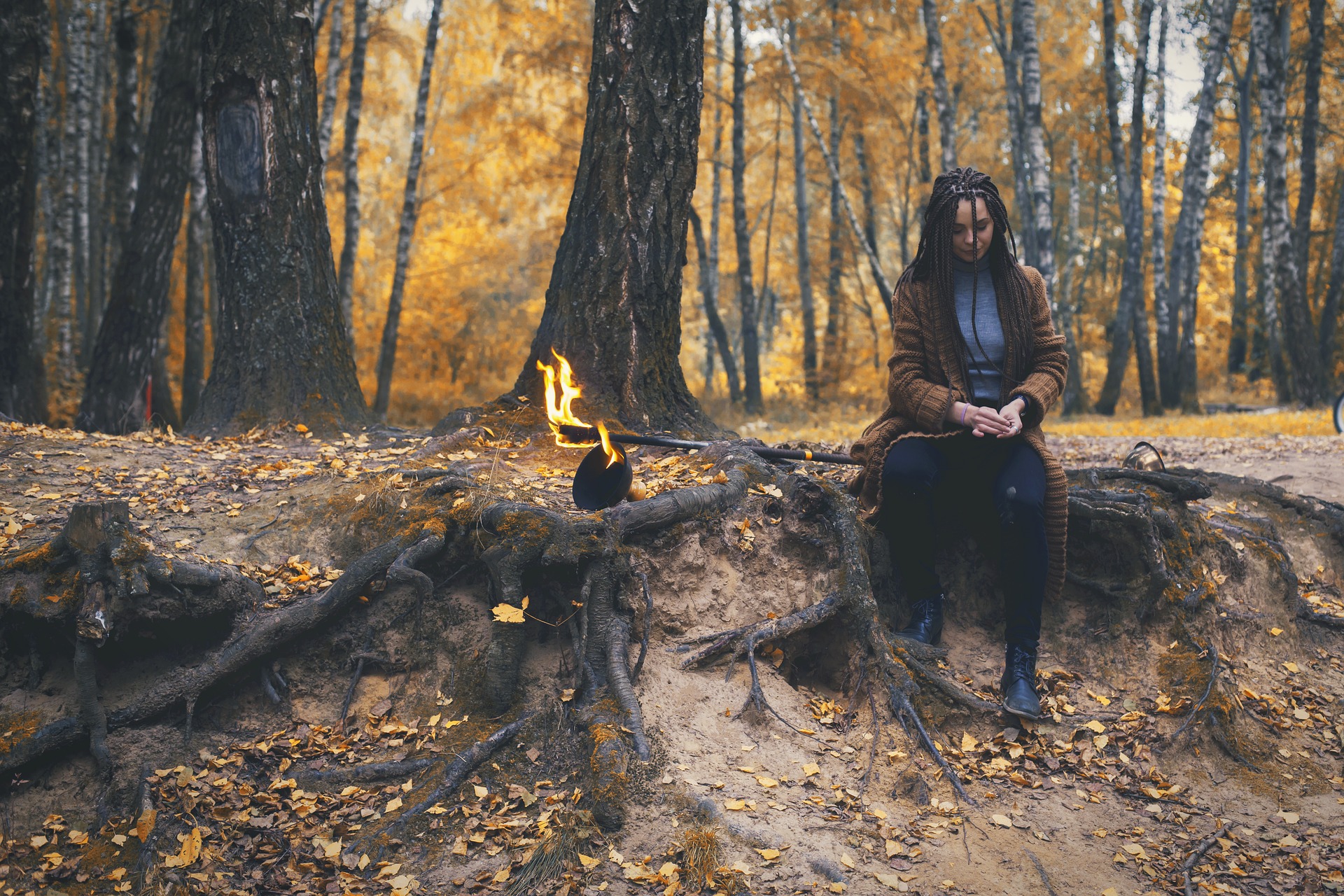 Interesting is that your interest may tell you a lot about the kind of witch you are. Yes, if you love cooking or probably love to be working with plants, herbs, or simple like to spend time in a beach (this remind me a friend that didn’t know yet she is a witch… other day we will talk about this :D!)

There are still many more types of witches – these are the most common presented by Aldora in her blog Kitchen Wiccan. In the last decade more people practicing have branched out as individuals and found certain strengths and attractions to become a force all their own. Go with how you as an individual feel, as you never have to “fit” into a category – these are just here to help you if you don’t quite know what type you are yet. You just may have a connection to one.

The witches who take the journey of traditional witchcraft, are interested in the old ways (pre-Christian), and are followers of history and the arts, building a foundation for their craft. Usually the craft is passed down generation after generation within family units. These witches are less inclined to participate in the worship of Goddess or Gods, preferring to work predominantly with the Spirit world and will often call on their ancestors or land spirits for strength. They work with moon cycles, planetary symbols and cycles, rune symbols, herbs and their chemical uses, the land and ancestors are very important to a Traditional witch.

Traditional witches are drawn towards both the dark and the light, performing banishing and repelling spells. They do not to follow the threefold law or the Wiccan Rede, (just to be clear traditional witchcraft is not Wicca) but careful consideration and responsibility is taken when performing any magic whether it’s healing, hex, curse or banishing spells. They perform Shamanic journeying by inducing trance that involves drumming, rattling, heavy dancing, rocking, entheogens, meditation, flying ointments, and more.

Hedge-riding is a practice that involves traveling to the spirit world through the use of trance work and other various techniques to alter the conscious mind (including entheogens, which are herbs and other substances used to induce trance) which allows the spirit to leave the body. Animism is a part of Traditional Witchcraft because they believe everything on this earth has a spirit or soul. They believe in an Upper World, Middle World and Under World. Under – those who’ve died, awaiting reincarnation or choosing not to pass on or can’t ascend. Middle – the here and now. Upper – spirits/souls who have ascended and no longer need a body as they can survive without the recharging of the spirit/soul that life is, or were never bond to a physical form/body to begin with.

This Witch carries practical sides of the Wiccan / Pagan religion, magic, gemstones, the elements and the earth. A Kitchen Witch is usually recognized as practicing Celtic Wicca: Goes by the elements, the Ancient Ones and nature. They are usually healers, respected highly and once they are past their 40’s tend to take on a “Wise Woman” role as they have an abundance of knowledge and are admired for it.

They work with plants, stones, flowers, trees, the elemental people, the gnomes and the fairies. But above all performs her magic in the Kitchen and has Goddess given talents for food crafting.  Potions, herbal remedies, and natural instincts for over protection of hearth and home. Most often they make the best mates as they are very crafty in love and relationships – and it is said one who is a friend of a Kitchen Witch has many perks.

Is the practice of nature-based and earth oriented witchcraft, drawing on the folklore, folk religion and folk magic of ancient cultures as they connected to the forest; such as the tree worship of Druids, the kitchen craft of Italian witches or the keeping of sacred groves as presented in Gallic paganism. Green witches usually practice a traditional form of witchcraft in which the earth, trees, herbs, plants and flowers are consulted for their medicinal and magical value.

They will grow their own herbs or Wildcraft them, and are very good at making herbal remedies. Belief in deities depends on the individual witch, though many Green witches acknowledge and earth mother or series of nature spirits as their deity. Usually, the spirits of nature, the dead (that of humans and animals) or the Fey have a large part in Green traditions. A form of green witchcraft which is better classified as Green Wicca was popularized by Ann Moura.

Hedge craft is a path that is somewhat shamanic in nature, (sometimes referred to as wise man & wise woman) as they are practitioners of an Earth-based spirituality. These are the ones who engage in spirit flight and journey into the Other world. They can, in this capacity, be very powerful midwives and healers. A bird of one kind or another is usually associated with the Hedge Witch, most commonly the raven and the goose.

The term “hedge” signified the boundary of the village and represents the boundary that exists between this world and the spiritual realm. (they are said to be Night travelers or walkers on the wind). Their main function is mediator between the spirits and people. They may also work as a herbal healer or midwife. Some claim it to be the continuation of the practices of the cunning folk and wise-women, while others say that it is a modern tradition.

An individual approach that picks and chooses from many different traditions and creates a personalized form of witchcraft that meets their individual needs and abilities. They do not follow a particular religion or tradition, but study and learn from many different systems and use what works best for them. Many Eclectic Witches refer to themselves as Solitary Practitioners, Sorceresses, Hedge Witches, Green, White, and Grey Witches. Some consider themselves Wicca, as long as the Rede is adhered to, the Earth and the Universe revered. One main complaint made against the Eclectic Witch is that they are not true Wiccans because they build a taylor-made religion or tradition for themselves from the ground up rather than following an established or correct form of Wicca.

Their minds remain open and are receptive to knowledge, ideas, beliefs and methods that others practice. They adapt well to different situations and create their own paths by what they believe to be true and right at that time in their life (simply put – they don’t follow rules). They like to explore and make their own mistakes and take from experiences in turn creating their own rules and traditions. It’s why you can bring 2 Eclectic Witches into a room yet they are totally different in the way they practice, live, and believe as they are all different in some way.

The term hereditary witchcraft, is given to the witch who has inherited the magic gifts through genealogy. (Keep in mind just because your Grandparents or Parents were/are witches does not necessarily mean you are too. Sometimes this can skip generations.) These witches are born, usually to a magical family and begin their journey very early in their life, using the gifts handed down through the generations.

Born into a tradition of esoteric origin (the conviction that nature is a living entity owing to a divine presence or life-force). These traditions are often not recorded, except in Grimoires which are also passed down but very highly protected, but rely primarily on oral and physical tradition. Each family has it’s own unique traditions. Most will stick together as family units rather than covens.

As the name implies, sea witches are believed to be able to control many aspects of nature relating to water, most commonly an ocean or sea. They specialize in water based magic and worship Sea Gods & Goddesses. However, in more modern times, sea witches can also practice witchcraft on or near any source of water: lakes, rivers, bathtubs, or even simply a bowl of salt water. Sea witches use witchcraft related to the moon, tides, and the weather, and are believed to have complete control over the seas.

In some folklore, sea witches are described as phantoms or ghosts who have the power to control the fates of ships their passengers. Sea witches often improvise on what they have, rather than making purchases from a store or from another person. Common tools include clam, scallop, or oyster shells in place of bowls or cauldrons. They are beachcombers and collect items including seaweed, fishing net, shells, sea grass, driftwood, pieces of sea glass, and even sand. Driftwood was used as walking sticks and charged as wands. Sea Witch works with what is termed ‘grey magic’ to maintain a balance of light and dark – most are solitary.