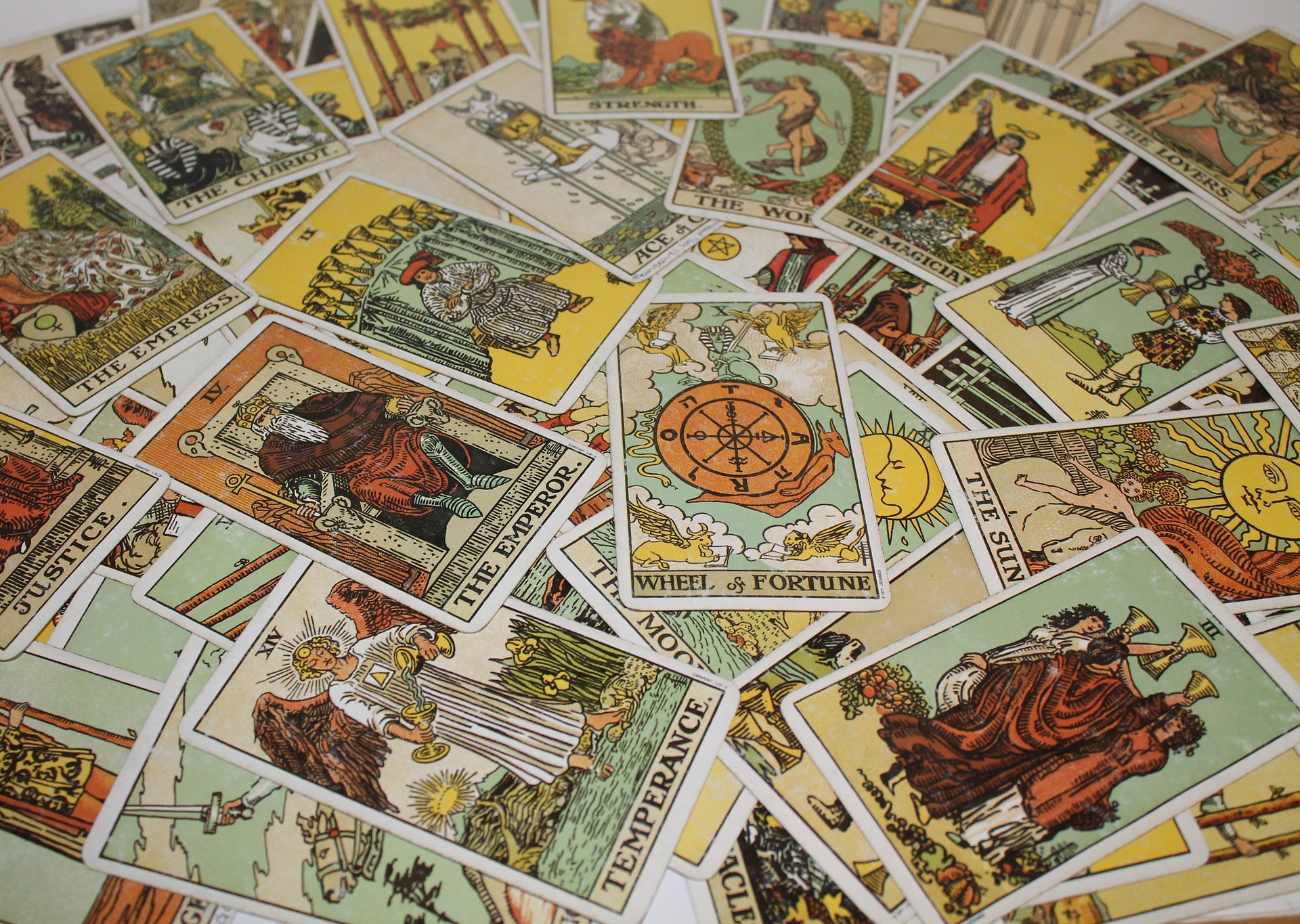 From the many types of divination, tarot reading is one of the most intriguing in my humble opinion. It is practiced by many witches and other spiritual beings. Tarot reading is an art: although it’s not that hard to learn, it may take a lifetime to master to perfection.

This is the first article from a series devoted to tarot. Here we’ll cover some basic subjects like card types and suits. This is an excerpt from a longer (and somewhat disorganized?…) document from beyondweird.com. But the information included is very good, so I decided to organize it a bit and share it with you. You may find the original document here.

As most subjects in witchcraft, nothing is written in stone. This means that you should take this article as a basic guide, and not as the sole truth and interpretation for the subject. Feel free to share your insights in the comments section.

Tarot can be used in several ways; as a means of divination, as a tool for self discovery, as an aid to spiritual or esoteric study or even as a game. Tarot is such a diverse medium that an entire lifetime can be devoted to it’s study.

The standard Tarot deck which is commonly in use today consists of 78 cards. They are divided into the Major Arcana, The Minor Arcana and the Court Cards. There are 22 Major Arcana or Trumps. These cards are thought to represent the Higher parts of our consciousness and have been linked with the Archetypes proposed by Jung, the 22 Letters of the Hebrew Alphabet, The paths of the Tree of Life, The I-Ching and the Runes among other things.

The Court Cards represent other people in our lives or aspects of our own personality. The Minor Arcana are concerned with the everyday, mundane affairs of day to day living such as work, school, the home and relationships. The Minors consist of four suits: Wands, Cups, Swords and Pentacles. In various decks these suits might be renamed, but they are usually recognizable.

There are 4 suits commonly found in Tarot decks: Wands, Cups, Swords and Pentacles. While they sometimes have different names, the idea behind them is usually the same. If you understand the meanings of the suits and have some knowledge of numbers, you can read the Minor Arcana of any deck of Tarot cards, or even playing cards for that matter.

Some of the more common alternate names are:

I have included some basic astrological descriptions as the two systems, Astrology and Tarot seem to complement each other. I have also noticed that many Tarot readers incorporate their knowledge of astrology into their interpretations and readings and that many people who are interested in one are also interested in the other. Since a great many people have some knowledge of Astrology, I thought the descriptions might be helpful in understanding the ideas behind the suits.

Wands can be described as the suit having to do with energy, creativity, communication, action, passion, self improvement/self development, spirituality and enterprise. If you look at the suit of Wands in most decks you notice that most of the cards show some type of action in progress, or someone who appears to be reviewing or enjoying the results obtained from a recently completed action. Action and energy are two key words to this suit. Wands are usually associated with the element of fire. If you know a little of astrology, think of the personality attributes of the fire signs, the forceful Aries, the flamboyant Leo and the honest and enthusiastic Sagittarius. Additional attributes include:

Cups are associated with the emotions, the subconscious, relationships and intuitive or psychic abilities. Most decks try to convey emotions in this suit; happiness, love, boredom, disappointment and dejection are usually represented and easily identified. This suit is associated with the element of water and like water can be calm and serene, or turbulent and rough. Astrologically, the nurturing Cancer personality, the depth of the Scorpio and the intuitive, dreamy Pisces could be applied. Additional attributes:

Swords are the suit of mental activity, rational thinking, decisions, and intellectual pursuit. Because much of the turmoil in our lives can be attributed to our thoughts, this suit often depicts conflict and struggle as well. Looking at this suit in most decks, one finds some of the more negative cards depicting nightmares, craftiness, pain and restriction. Swords are usually associated with the element of air. Astrologically one can think of the Libran desire for balance, the contradictions inherent in the Aquarian personality, and the Gemini’s thirst for intellectual stimulation. Additional attributes:

Pentacles are the suit associated with work, money, crafts, the home, the physical body. Looking at this suit, one sees craftsman at work, business being conducted, the physical comfort and security of having material things and the physical discomfort and pain of not having them. Pentacles are associated with the element earth. Astrologically one can think of Taurean practicality and love of home, the Capricorn’s financial and business prowess and the Virgo’s industry, skill and productivity. Additional attributes:

Swords and Wands are usually associated with Air and Fire respectively, however some writers have reversed these attributions assigning Fire to Swords and Air to Wands. Emily Peach does this in “The Tarot Workbook” and Ellen Cannon Reed does as well in her deck ,”The Witches Tarot” and her two books “The Goddess and the Tree” and “The Witches Tarot”. Arguments can be made for both points of view and you should chose whichever attributions seems to fit best to you. The same is true of the directions assigned. An alternative system for directions taken from Astrology is: Wands – East, Cups – North, Swords – West and Earth – South.

In our next article in the series, we’ll talk about major arcana cards and their meanings. So stay tuned!